In the early weeks after you had your baby, every single day your baby is putting in extra demand for milk at the breast, and your body makes milk accordingly – and that milk supply starts to build up and build up and build up. And usually by about the fourth or fifth, maybe even the sixth week, your body is pretty much geared to making a very similar amount of milk for your baby, just according to his needs.

Some of you however will naturally produce more milk than your baby needs – and this is usually due to your own interplay of hormones which have caused this issue. And it’s true that women who are struggling with supply can look at people with a great amount of milk and think ‘oh this must be fantastic!’ But it does come with its own drawbacks, that’s for sure!

So if you do have an overabundance of milk, one of the first things you might have noticed, is that you appear to have a fast flow of milk (fast letdown video) and your baby may be struggling with that fast flow – coughing, spluttering, sucking in a whole load of air on latching, and sometimes even intermittently throughout the feed. 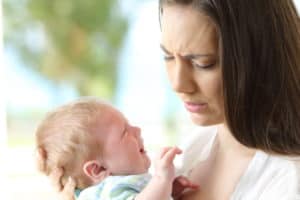 So I would encourage you to look at the video relating to fast flow for some strategies that you can use to combat that. Another thing that you might have noticed is that your baby is taking in high volumes of milk and gaining weight quite dramatically, maybe as much as one pound of weight per week – and following often on one of the highest centile lines on his growth chart.

Another thing that you’ve probably noticed is that your baby appears fussy (fussy at the breast video) after the feeds, and even when he takes a feed and a good one, he can STILL appear quite hungry, very soon after. So it all becomes quite a distressing situation, and an unsettled situation.

Because of this you might actually believe that your baby ISN’T getting enough milk, and this is the irony of the situation. The truth is that your baby is taking in high volume milk at the beginning of a feed (which has a high amount of lactose in it, but low fat), and he is never quite draining the breast, never reaching the fattier low volume milk as the feed progresses. So babies tend to fill up on high volume, and when they’re offered the next breast, they fill up again on high volume – but never quite feel satisfied enough.

Also, large amounts of lactose, are going through your baby’s stomach, which can cause him to be windy and uncomfortable. So it’s quite an unsettled and distressing situation for mother and baby. And you yourself, as well as the distress that you’re experiencing, may also be leaking milk between the feeds. You might be suffering sore nipples as your baby may clamp down to control the flow, because of the fast flow.

It may be that you’ve even experienced blocked ducts and mastitis because of overfull breasts and engorgement. Please look at the videos relating to those things, as well, which can help to relieve those situations too.

So if you and your baby are experiencing these symptoms I want you to know that there are ways to slow your milk production. I would however caution you not to slow your milk production in the first four weeks, only because at this time it may be some temporary issues that are happening. Maybe you have a smaller baby who is just struggling a little with the flow – and that will settle down after a while, but if after four or five weeks these issues are still happening, then certainly the things that I’m going to talk about could be relevant to you.

So first of all, many mothers who’ve been experiencing an oversupply and a rapidly gaining weight baby, have found that by just offering one breast per feed (one breast or two video) has had a great improvement in gradually reducing that milk supply, and then it has been much more manageable for the baby. But it is really important, and I must stress that you need to hand express to comfort on the other side that isn’t being used at the time – whenever you feel uncomfortably full, use hand expression, and that will prevent a blocked duct or mastitis.

If you’ve tried this strategy for a few days and you really don’t find that those symptoms are settling down, and everything is just as unsettled, it might be that you will need to do what is called block feeding. This means that you could try a block of feeding – e.g a three hourly block So this is a block of time.

So you start feeding for instance 10:00 am. till 1:00 p.m. on the left side. So every time your baby wants to feed you will ONLY bring your baby (within that three hour period) to that left hand side. But on the other side, you will hand express to comfort so that you prevent a blocked duct.

The next three hourly period will be on the other side. And you basically watch the clock, to allow this block feeding to work. Look at your baby’s symptoms and see if everything is settling down. 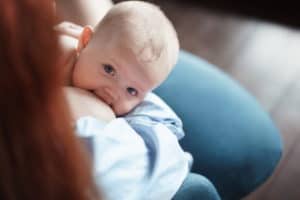 If you find that this three hourly block is not really making a difference, you can then increase the block time to four hours, for instance, – so four hour period on one side and then a four hour period on the other side, and keep doing that throughout the 24 hour clock. But always keep the other side comfortable with hand expression, and between feeds, if you do feel that there’s a real congestion going on, and hand expression isn’t really doing enough to keep things comfortable, you could use a cool compress on that particular breast, maybe 15 minutes, just to relieve that congestion.

It may be that even a four hour block isn’t enough – you may need to extend the block to five hours or six hours. But this is potentially really going to cause your supply to drop dramatically, so it is important that you do have skilled help at the time to just keep an eye on the baby’s weight – that everything is going in the right direction, and for your general support as well.

If you find that even with all of these measures it still isn’t enough, you can use a technique called full drainage and block feeding. That really means using a double electric pump – first of all to drain your breasts as thoroughly as possible really, and then to start a three hourly block on each side, as I’ve mentioned earlier.

If you are experiencing oversupply problems, I can fully understand the rationale that would suggest to you that you need to pump your milk to take that milk off the breast and to relieve that feeling of fullness. I’ve seen too many women, who because they didn’t understand how milk is made, thought this was a good idea, and ended up with the pump in effect telling the body to make EXTRA milk, and therefore compounding the problem.

Some of these ladies have ended up with blocked ducts and mastitis. I have known somebody to even get an abscess, so I do want to caution you not to excessively stimulate the breast when you’re in the middle of this situation, with oversupply, because it really can compound the issue, and it’s unnecessary.

The good news is that even if all of these measures don’t completely solve this problem, as the weeks go on and your baby gets bigger and more able to cope with the milk supply, everything changes. Many women will let me know that their supply has settled down, and babies have started to really settle at the breast a lot better as well. So everything moves forward.

One breast or two

My baby is bringing up a lot of milk! 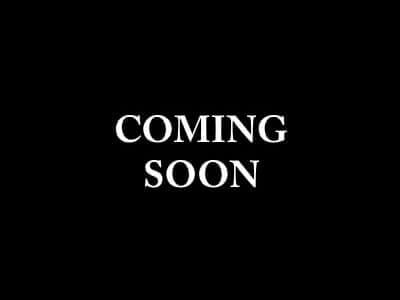 Other causes of green poo