The World Health Organisation recommends that all babies should be exclusively breastfed for six months, and that means no water or solids – and then to carry on with breast milk, alongside complimentary foods for up to two years of age and beyond.(how long video) (benefits)

We know from research that breast milk is a nutritionally adequate food and it gives your baby everything that he needs, all in the right amounts, and your baby’s digestive system is far more able to cope with foods at six months those foreign proteins coming into his body. There’s a full complement of enzymes then, ready to digest that food.

There’s also evidence to show that the more exclusively breastfed the better in regard to the risk of your baby getting things like diarrhoea and other gastric illnesses. There is a particular study which compared babies who had been breastfed for say three or four months or formula fed compared with exclusive breastfeeding for six months, and found that the babies who had had breast milk were far less likely to develop those things.

And we also know that waiting until six months can reduce your baby’s risk of developing food related allergies and intolerances, especially where there’s a family history. And another study has also shown the reduction in risk of things like pneumonia and recurrent ear infections, when they’ve compared babies who’ve been exclusively breastfed for six months as opposed to a shorter period of time.

We live in an age when there’s so much talk about obesity and how to reduce the obesity epidemic, and exclusive breastfeeding can reduce your baby’s risk of obesity. There are so many studies now which are showing that really positive link. 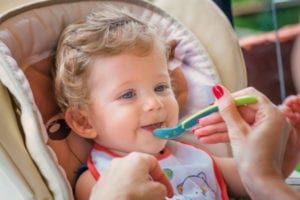 And alongside that exclusively breastfeeding your baby for six months before you start introducing solids can reduce your own risk of breast cancer as well as reducing the risk of anaemia too. It can help you with weight loss.

So your baby will be developmentally ready to start solids around the six month mark. Some babies may take just a little bit longer but it is generally accepted to look out around that time for the signs that are showing that your baby is ready for solids. Please bear in mind that the guidelines for starting solids have changed over the years and many years ago it was suggested that if your baby started waking up at night for instance, that was a sign that he was ready for solids and that baby might have been as young as three or four months –so we now know that that isn’t true, and that babies will wake at night for various reasons.

We know that babies can wake at night when they do what they call reverse cycling, (night feeding) (normal patterns) which is because of distractibility in the day they tend to make up the supply at night, and start to feed more frequently. They may be going through a period of teething or just generally a developmental change for instance. So these are not reliable signs.

So how will you know that your baby is ready to start solids? One of those signs is that he will be able to sit up well without support. There’ll be a lot more muscle control there and he’ll also lose that extrusor reflex, where your baby sticks his tongue out. That tends to disappear around about six months.

And when we used to give babies puree much earlier on, maybe around the four month mark – those babies were often just pushing that food out of their mouth, and that reflex will disappear – and you may feel that if your baby can use his palm to scoop up food and try to put it into his mouth, that he’s ready for solids. But he really does need to be able to have a pincer grasp, and that is being able to pick up that food between his thumb and forefinger himself and bring it to his own mouth.

I think it’s good to remember that if you give anything before six months particularly solids you can be tempted to think that your baby will be getting extra calories, but often they’re getting less calories than the actual breastmilk itself. There’s also then less protection. So when you see these reliable signs that your baby is ready then that is a good time to start. But remember that your breast milk is still able to provide three quarters of your baby’s nutritional requirements between six and 12 months.

So when you start solids they will be providing extra zinc and iron and contributing to that nutrition, but your breast milk is still paramount. It’s also good to know that along with the zinc and iron, food is really providing your baby with an opportunity to experiment with tastes and textures, and so it’s a good rule of thumb to feed your baby at the breast before the food, and then when he has had some you can feed again. Feed your baby as often as needed.

So when your baby is ready to eat solids you may wish to have him sit upright in your lap to start off with those foods, or sitting in a high chair with something underneath to catch all of that mess that happens because babies are messy creatures – and I think it’s a really good idea just to offer very small amounts of food at first – maybe just a quarter of a teaspoon once a day, gradually increasing that as your baby needs, and try to offer just one food at a time for a few days just in case your baby does have some kind of intolerance to that food.

But if you do have a family history of intolerances then have a look at the video relating to that specifically. Some good first foods are fruits like bananas which are ripe and sliced and cut into smaller amounts as well. Very soft things like avocado are good. If you use apple it’s always good to soften them up first of all in the microwave, cool them down just so that they are easily manageable. There’s always a risk that babies could choke on harder pieces of fruit or vegetables that you give your baby, so just ensure safety, and never leave your baby unattended. 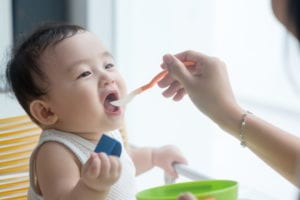 And of course vegetables are a great food – but remember to wash them and peel them and cook them until they’re tender so that it’s much more easy for your baby to eat those foods. Mashed potatoes are good as well and sweet mashed potato, all cut into chunks. All of these are great first foods.

And it is important that babies around the six month mark do need to get that extra zinc and iron from the food, so meats like well cooked chicken and even beef that’s very easy to eat shredded into very small pieces. Those things are good, and fish too – but make sure that there’s no bones in the fish.

And of course bread in the form of fingers of toast can be excellent for your baby, and babies do love finger foods. Crackers and bread sticks and things like that can be excellent – but if you do have a family history, and it is good to give a variety of foods of course but always good to introduce things that can be potentially allergenic one by one. So cows milk, eggs, wheat, gluten, nuts and peanuts and peanut products, seeds and fish and shellfish – always best to offer them one at a time, and of course not before six months.

If your baby has already been diagnosed with a food allergy or intolerance, or you yourself have such a thing or hay fever, asthma or eczema, any of those allergic illnesses, then it’s always good to speak with your health care provider and/or a dietitian.

And remember that after the introduction of solids, breastfeeding can continue for a substantial amount of time. There is no upper limit to how long you do that. It’s really for you and your baby to come to that decision.

How long should I feed my baby for?