Do I have a breast abscess?

Do I have a breast abscess? – Transcript

If you’re in a situation at the moment where you thought you had a blocked duct and you’ve been trying to get rid of that blocked duct, but there’s still evidence that there is a lump in the breast, and that lump is not going away at all. It is possible that you may have an abscess. It’s also possible that it could be something else as well, like a cyst or a galactocele, so if this is the situation you have found yourself in, it’s really important that you ask your GP for a referral so that he can have an ultrasound scan – painless scan which will help to identify what this is.

This type of scan uses high frequency sound waves to create an image inside the breast. It’s important to empty your breasts as well as possible beforehand just so that the technicians will have a better chance of reading the results better.

So what is an abscess? It’s actually a painless or painful swollen lump that you would feel usually just under the surface of the skin on the breast, although it can be in other places as well, but it’s an enclosed area of pus, which can’t just be treated with the normal antibiotics – and of the ladies that I’ve met who’ve had breast abscesses, some have felt no pain at all and only saw some red patch on the breast when they could see a lump, but others actually had a fever and felt some pain as well as the lump, so it can be quite variable.

So how do you get an abscess? Usually an abscess starts with a bit of engorgement. Now maybe your baby wasn’t feeding well at the breast. Maybe there was a missed feeding, even, you got a bit of engorgement. The engorgement is a congestion of milk where milk is hanging around going nowhere, and suddenly a duct can get blocked – that blockage, if it’s not relieved – the milk inside that blockage leaks out into the surrounding tissue and can cause a general inflammation of the breast which is called mastitis – and basically unrelieved mastitis can lead to a bacterial infection and a breast abscess.

I just want to mention also that an infection of the breast can occur through sore cracked nipples. So it’s important to keep on top of latching and ensuring that you are comfortable when you’re feeding. I understand that if you’ve been diagnosed with an abscess it can seem like a really bad turn of events, and many women think that breastfeeding has to stop at this point, but the great news is that it is treatable and there is ways to go forward. 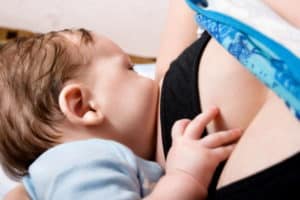 So if you do have an ultrasound scan and it is revealed that you do have an abscess, it’s important that that abscess is drained. Now what will usually happen is that the drainage can be done with a needle and syringe – and that is sometimes all that is needed. Some women have to go back a few times to have it redrained, but if it’s a larger abscess you may need to have a small incision made to allow that pus to come out.

If that hasn’t resolved it, then you may need to have it surgically drained, and that can be done under a local or a general anaesthetic. If you do have to have an incision made in your breast it’s important to have a chat with the doctor who will be doing that, just to make sure that you are aware of your options regarding the type of cut that’s made,  because cutting around the areola area can actually cut into the ducts inside the breast and that can potentially reduce your milk supply.

So it’s just really for options for you, for now and for the future lactation as well. Once this procedure is done the doctor will then send off the pus to have it cultured, and that means that they’ll be able to identify any particular bacteria that may be there, and you will then be able to be given an appropriate antibiotic.

So you may be wondering whether breastfeeding can actually carry on or whether you have to stop breastfeeding in this situation, and the great news is that it is still possible to continue feeding even on the side where you’ve had this procedure, as long as the incision and the drainage tube is far enough away from the areola area and the nipples, so that your baby can actually still latch and feed and it’s not going to interfere, then that is fine. 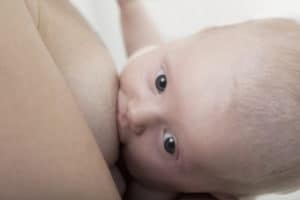 So whether or not your baby is actually feeding on that particular breast or not, it’s still really important that you keep your breast drained as well as possible either pumping or feeding – but the most important thing is to prevent blocked ducts and engorgement and mastitis.

And I’ve come across situations where I’ve known ladies who’ve had breast abscesses and they’ve gone to the breast clinics and been told by maybe one member of staff that it wasn’t possible to allow breastfeeding to continue while the drain was insitu, and that the wound would never heal. This isn’t actually true, because breast milk has lots of antibodies in it which help to prevent infection, and although it may take a little bit longer for that wound to heal, it will still heal up.

I certainly want to encourage you that with the right antibiotics and with continued emptying of the breast and prevention of blocked ducts, even as you continue to breastfeed, the healing process should take only three to four weeks. I also want to reassure you that if you are not able to feed on the side that has been affected you can continue to breastfeed absolutely fine on the other side because breasts work independently so your body will make all the milk that your baby needs from the unaffected side, and although the supply will drop on the affected side, it is possible that it can be reversed at a later date. So breastfeeding can certainly carry on.

In order to help you to get past the next three to four weeks of healing really important that you spend lots of time with your baby, lots of rest for yourself. Eat well to keep your energy levels up and get all of your family around if you can – family and friends to help you in this situation with household tasks so you can concentrate and heal up, and move forward. So finally if you think you’re developing an abscess please seek out skilled lactation support as soon as possible and get that prompt treatment.

I’m producing too much milk