Will using a dummy cause nipple confusion?

Should I give my baby a dummy? – Transcript

Many of us have grown up with the ideas that dummies or pacifiers as some call them are a normal kind of tool to help babies to settle and to calm down maybe when they’re crying for instance. And certainly when we look at greeting cards and lots of things relating to babies we tend to see these images of pacifiers – and I think this is the main reason why breastfeeding mothers often asked why the baby is using them as a dummy and getting really concerned about that.

We know the babies are born with a natural Instinct to suck, and babies suck at the breast for comfort and for warmth and also for nutrition, so biologically speaking it is actually your breast which is providing that total comfort for your baby (using breast as a dummy)and dummies could be considered to be a substitute for the breast.

So please bear in mind that your baby will come to the breast very frequently. It can feel overwhelming but it is certainly normal – and have a look at the video called “Using breast as a dummy” because this will give a bit more detail about what that means.

So, I do get asked the question is it ever right to give your baby a dummy, is there an actual need at any point, and I know some breastfeeding mums will say that they have used the dummy for instance while they’re driving in the car. If your baby happens to be crying and you’re unable to get to your baby at that point (offer then) – it can certainly tide you over a little, but that’s just one example.

And some breastfeeding mothers will tell me that they want to have the baby a dummy because baby is crying a lot and they’re not sure how else to calm a baby down. But if you are considering this option it’s important for you to know that the first four to six weeks is usually that time when you getting your breast milk established and studies are showing that giving dummies at that point can interfere with that process at times. 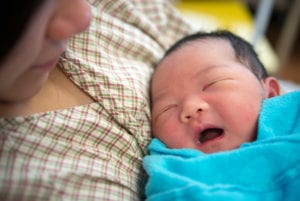 So I would suggest as a good rule of thumb, wait until you have established your supply and that that has settled down and your baby is gaining weight well (reliable signs) according to his growth chart.

However if you find that your baby isn’t gaining weight well in those early weeks I would encourage you to put that dummy aside, because sometimes babies are so able to be pacified with that dummy it could mask your baby’s feeding cues and instead of your baby then stimulating your supply, the dummy itself is causing him to settle down, not to ask for that milk, and therefore not to generate that milk and get that milk   – so sometimes there can be a weight gain issue.

I once came across a lady who said that she was giving the dummy for about 2 hours a day to her baby and the weight gain was quite poor. But as soon as she omitted that dummy over the next few weeks, he started to gain weight really well.

And if you are experiencing difficulties with latching or sore nipples or mastitis or blocked ducts, any of those scenarios it will be a good idea to put that dummy aside.

Sometimes dummies are given to premature babies to aid digestion and to help to stimulate the sucking reflex if they’re having breastmilk given by tube feeding so it is usually a temporary situation  – but that is a specific area where dummies would be encouraged.

And you may have heard that dummy use has been associated with a reduction in risk of SIDS –   Sudden Infant Death Syndrome compared to babies that haven’t used dummies and I think this can be a very confusing issue for breastfeeding mothers, so I would encourage you to look at the video relating to this issue specifically.

I also think it’s important for you to know before you make a decision about whether to give a dummy or not, that dummy use has been associated sometimes with thrush infections which can be passed on to you as well, so this would be a thrush infection in your baby’s mouth, and an increased risk of ear infections.

It’s also been shown that prolonged use of dummies can sometimes cause teeth to come in more squint and sometimes can affect speech development too.

So I think that you could surmise from the video that maybe I’m not in the habit of encouraging dummy use particularly with breastfeeding mothers, but I do appreciate that there is some flexibility and certainly getting your breast milk established first is important, and keeping an eye on your baby’s weight gain as well.

But I would reiterate the fact that biologically you are the most important source of comfort for you baby.

My baby is using me as a dummy!

Should I offer both breasts at one feed?