Can I breastfeed whilst pregnant? – Transcript

A lot of people are under the impression that if you are breastfeeding it’s impossible to get pregnant. This isn’t in fact true. What we do know is that the hormones involved in lactation can suppress ovulation, so it suppresses the release of an egg – and therefore if you are breastfeeding your baby around the clock, as many people are in the first few weeks and months, then it’s very unlikely to get pregnant during that time.

However it only takes a missed feed, or your baby sleeps that little bit longer, and that regular feeding goes out of the window. So it is possible to get pregnant. So if you have discovered that you’re pregnant while you’re still breastfeeding your baby, or even your toddler, then you might be asking yourself ‘do I continue breast feeding?’ Is it possible to breastfeed both? (tandem feeding video)Is it okay to breastfeed while I’m pregnant? These are the questions that I do get asked by ladies.

But if all you are looking for here is information around tandem feeding, because you’ve made up your mind that’s what you want to do, then have a look at that video. So yes it’s great to know that there is flexibility, and you CAN make that choice to carry on feeding your baby or toddler while you’re pregnant – it may be that you decide to wean during your pregnancy, gradually weaning your toddler from the breast, or to carry on tandem feeding.

It’s really great to know that your breast milk is still providing a good source of nutrition to your baby or toddler, even while you’re pregnant, and then also providing all those antibodies too. (how long and benefits videos) 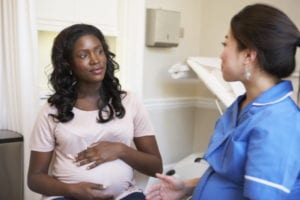 I know that some mothers have had concerns that while pregnant, if they’re breastfeeding, this could actually bring about a miscarriage, for instance, but certainly a recent review of the literature around that doesn’t seem to be pointing to that – certainly in healthy pregnancies.

I would say however that if your pregnancy is a bit more complicated – maybe you’ve had some extra bleeding, or there’s a risk of preterm labour, then it’s important to work alongside your obstetrician and your midwifery service. It might be that they suggest that weaning from breastfeeding is the most important thing or partial weaning or maybe to carry on, but working alongside the health professionals is really important.

So if you do have a healthy pregnancy and you want to carry on breastfeeding you might be wondering what to expect as those weeks go by. Now one of the first things that a lot of pregnant women find is that the nausea which you often get in pregnancy can be exacerbated because of all the hormones involved with breast feeding. It isn’t true for everybody but certainly some people have found that. Frequent small snacks, as we would always encourage pregnant women to take, can help a lot.

You’re also going to find that you are very hungry. Now most pregnant women will say that that’s the case, but if you imagine the nutritional requirements for both your body, your unborn baby and your baby or your toddler who you are breastfeeding, there is a huge amount of calories that are needed – so being hungry is normal!

So I would encourage you to eat well and keep up that calorie intake so that you’re going to be well nourished and your body will be able to provide all the calories needed for all concerned. And it certainly is important for all pregnant women to take a supplement of vitamin D and folic acid while pregnant.

Your main aim is to gain as much weight as you would have done had you not been breastfeeding. If you do feel that you are particularly malnourished (perfect diet) or you have a medical condition, then I would encourage you to seek out a dietitian’s help so that you can make sure you get all the nutrients that you need.

Another thing that you might notice when you’re pregnant and breastfeeding is that your nipples become highly sensitive – and for many pregnant women this can just feel a step too far – and you may feel an irritation, and some breastfeeding women have decided to give up. If this describes you at the moment, just know that this is down to hormonal changes and it isn’t forever- that’s for sure. What you can do is to limit some of the feeding times and ensure you get a really good latch (comfortable feeding)as well. It might be that you distract your toddler where you can, offering snacks and things like that and get as much help and support as you can from your family. 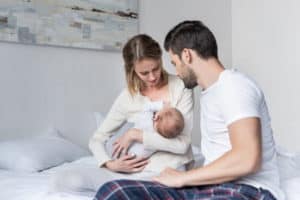 And something else you may notice round about the fourth or fifth month of pregnancy is a decrease in milk supply. This is perfectly normal as your body prepares for feeding your new baby – but this isn’t usually a problem if you’re feeding a toddler for instance (usually toddlers are only having small amounts of milk at the breast generally). However if you became pregnant while you still have a baby, it’s good to monitor your baby’s weight in this situation because extra pumping is not likely to increase that supply and sometimes a baby may need some supplements.

And I know that I’ve just mentioned the nipple sensitivity that you can get but you can imagine if your milk supply has dropped a little bit, your toddler or your baby may struggle to latch or change the latch because of that decreased supply and cause extra soreness for that reason. So please look at the videos relating to positioning and ways to manage sore nipples too, and please bear in mind that the decreased milk supply is really your body producing colostrum again, which is the much lower- volume sticky milk that’s packed full of those antibodies – but it does have a laxative effect, and you might find that your baby or toddler has much softer and looser poos because of that – but this isn’t harmful so it isn’t a problem as such.

What you might find in pregnancy as your supply drops and colostrum is produced again, often toddlers particularly will self wean. This is also because the volume of milk reduces and the taste changes. Sometimes those toddlers are a bit frustrated with the lack of volume and the changing taste, and many of those toddlers will self wean. However, some will not. Some carry on, very happy to have that colostrum milk.

So once your baby is born the colostrum will still carry on for the first two or three days until the volume starts to increase, as it would with your first baby.

You can decide really if your toddler hasn’t already given up breastfeeding, whether you want to carry on at that point and really only you can make that choice. But there is great flexibility. Nothing is set in stone. It might be that you allow both toddler and baby to feed alongside each other and you carry on like that for weeks or months. It could be that you decide to allow your older one to wean from the breast, but I have known ladies where later on, the older one came back to the breast at a later date. So nothing is set in stone, even then, as I say, and you can make that choice.

How long should I breastfeed for?

Weaning from the breast